info@CipherEngineers.com +92 321 9009954
1.&nbspNew Stock available in Pakistan   2.&nbspCipher Engineers is Exclusive Distributor in Pakistan for Serus Water Filters   3.&nbspSERUS RUSSIA is a manufacturer of self cleaning inline water filters, structured water devices and Ultraviolet lamps for home,commercial and industrial use

WHAT IS WATER STRUCTURED


Conventional tap water, unfortunately, with a large number of impurities, differs significantly from the structured water contained in the body and is poorly held by biomolecules.
Using such water, a person systematically destroys his internal structures, the restoration of which, due to the processes of self-regulation, the body expends a large amount of bioenergy, constantly processing such water to give it a more homogeneous structure that corresponds to the liquid media of the organism.
Thus, in order to facilitate the work on water restructuring and to save a certain amount of bioenergy in order to spend it for any other purposes necessary for human life, it is necessary to use purified drinking water, the molecular structure of which is close to the structure of ice. Structured water has long been used in folk medicine, where it was used as a universal remedy for the treatment of many diseases. It should be noted that the use of structured water contributes to: - reducing the amount of cholesterol in the blood - normalization of arterial pressure - improvement of metabolism - excretion of sand and small stones from the kidneys and gall bladder - improving sleep - improving the body's response to taking medicines. - restoration of normal acidity. Regular rinsing of the mouth helps: - remove dental calculus - cure parodontosis - clean the tooth enamel from soft plaque.

At birth, a person is 87.8% water.
The child is literally filled with life-giving, clustered, structured, easy water, which for 9 months has developed and passed on to the mother's body. But already in middle age we consist only on 60% and in the elderly by 47% water. Together with water, we lose life-giving vitality, since light, structured water is the basis of human photosynthesis, when a quantum decomposes a water molecule into a proton and a positron, forming erythrocytes and hemoglobin, the basis of human life. And no matter how much we drink ordinary water, it does not increase the percentage of water in our cells, working only on the metabolism of the body. If we briefly outline and simplify the models of the course of real chemical reactions, the structure of water can be described as follows: The well-known formula H20 says that the water molecule consists of one oxygen atom and two hydrogen atoms:
Consider how this molecule is formed. 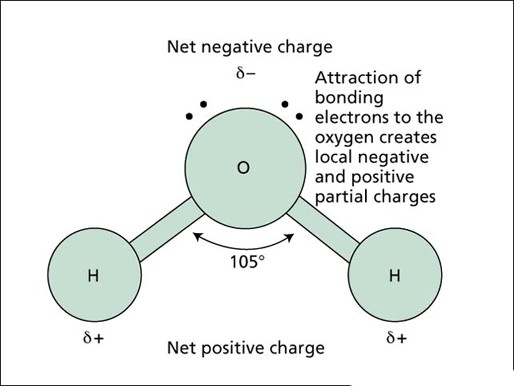 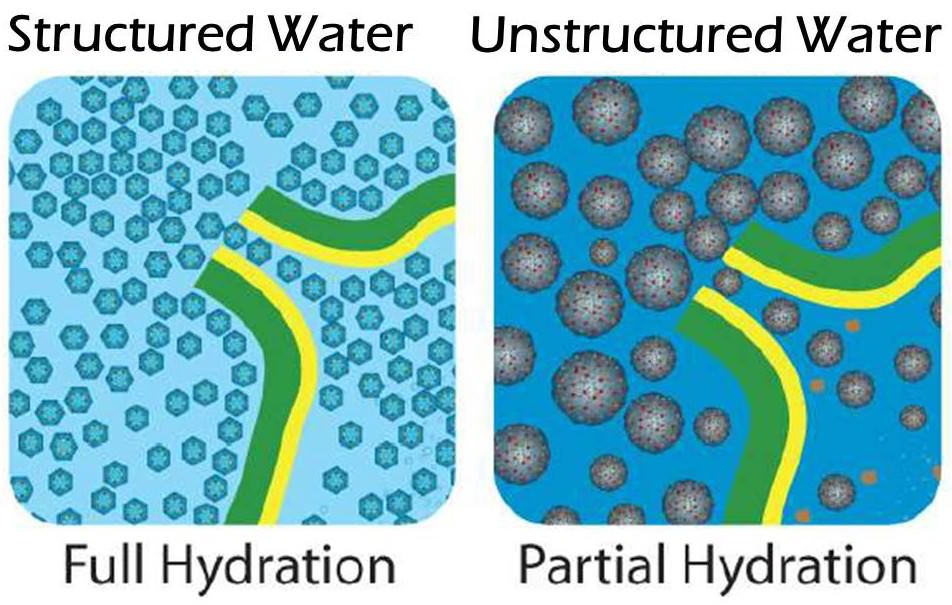 As emphasized above, water has a certain liquid crystal structure, due to the chemical composition and physical properties of water. This structure can be imposed both positive and negative information. Negative information can most often come from inanimate nature (geopathogenic zones), from chemical pollution or from a person (negative emotions, anger, anger, aggression). Every 15 days our body completely renews the blood. Water, the main component of our body, is also periodically renewed. In example from time to time 70% of ourselves are updated. Obviously, the "building material" for such a cardinal renewal, the body takes from the liquid that we consume with food. It is also obvious that the better the liquid is, the better.
You can imagine what shock we are putting our bodies in, providing instead of "building material" something very remote from what he is ready to take for "processing" - a variety of "colas" and "sodas.
" Carbonated water is "dead", and killed so much that it cannot be revived by its constructors, neither natural nor artificial. There is a very high probability that the organism is not able to process it, and if it does, it expends a colossal amount of energy. The chemical formula of water is H2O, that is, 2 hydrogen atoms and 1 oxygen atom. What makes the water so unique is the arrangement of both hydrogen atoms, which are connected by an oxygen atom, forming an angle of 104.7 °. Due to the asymmetric distribution of hydrogen, the water molecule acts as a tiny magnet, positively charged from the side of hydrogen, and negatively on the side of oxygen (a dipole character). Just as the "clusters" of the computer's hard disk are programmed, hydrogen clusters (macromolecules) are also programmed.
The structure of macromolecules is the key in the behavior of water, there is an accumulation of energy and information, thus, water is the carrier of energy and information. Only on whether it is alive or dead, it can make us healthy or sick. 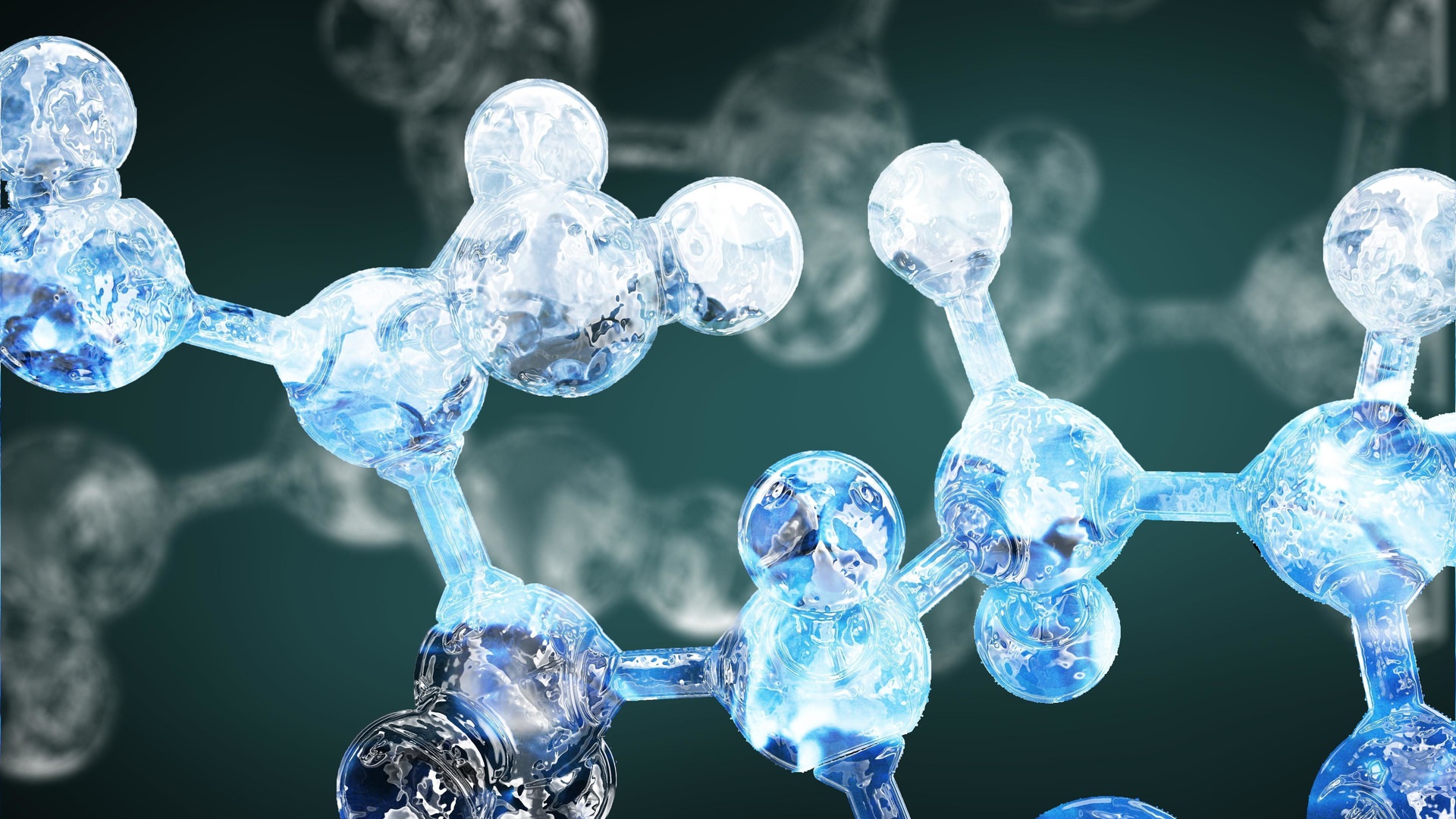 Harmful substances contained in water, in turn, program macromolecules, informing them of their own oscillation. If such water is filtered, the chemicals will be removed, but the information of the toxic substances will continue to remain in the program of macromolecules. There is a scientific development of water structuring done by Serus LLC Russia.
Thanks to the special technology of biomagnetic water treatment with the use of amber and rock crystal, the structure of water molecules and the information embedded in it fundamentally changes.
The water that passes through the pipelines and this is almost all the water that enters our body is destructured. We drink this water, bathe in it. In our body, any healthy cell, no matter what, is always surrounded by structured water, and every diseased or injured cell is surrounded by unstructured water. The biomagnetic fluid structurer restores the natural life-giving properties of water, returning the correct structure to clusters.
AMBER is a natural "biostimulator" - it has unique properties for restoring the human biofield.
Amber has a preventive effect, not giving carcinogens of all possible origins to cause genetic malfunctions. Rhinestone - is used for ultra-fine cleaning, removes free radicals, heavy metal ions. Contributes to the formation of the cluster structure of water.
Magnetic molecular structurer-growth stimulator is the energy-Converter structure of the liquid that can be applied in all areas of agricultural production. To energy-water treatment device is an active system consisting of a rare earth, PolygraphInter, multipolar magnets in combination with the rhinestone, amber and turmulin.
Located between the magnets, the crystals transmit to the water accumulated in them over millions of years, hyperfine fields, and energy, which are enhanced by magnets that are located around the crystals.
This magnetic water structurer revitalizes water, which according to numerous clinical trials has a strong regenerative, healing and enhancing effect on the cellular level. Biological treatment allows you to remove all harmful substances – chlorine, lead, copper, heavy metals, bacteria, microorganisms, viruses, parasites, antibiotic residues, poisons, and chemical fertilizers. This simple and reliable method gives us a really useful water, which can quench the thirst of each cell and each nucleus of the cells of any living organism. Water will have a high, stable and biologically valuable quality.
Areas of application in agriculture.
1. Crop. When watering activated water on seed germination is accelerated in comparison with usual 3-5 times, the growth rate increased, increased hardiness and disease resistance, increasing yield. Decreases the use of organic and inorganic fertilizers.
2. Animal. In the use of activated water in animals increases resistance of the organism, they get sick less, decreases the case. Improves the quality of meat and milk. Decreases the amount of antibiotics and vaccines used.
3. Poultry. In the use of such water in poultry increases egg production, increases body resistance, reduced morbidity, reduced mortality, reduced antibiotic use. 4. Farming. When drinking this water in animals improves the quality of fur, increases resistance of the organism, they get sick less, decreases the case.
5. The cultivation of mushrooms. By drinking ionized water accelerates the growth of fungi, mushrooms are not exposed to different kinds of mould such as brown spot, green, cobwebby, orange, white, hairy, etc. the Collection of fungi increases in 1,5 – 2 times